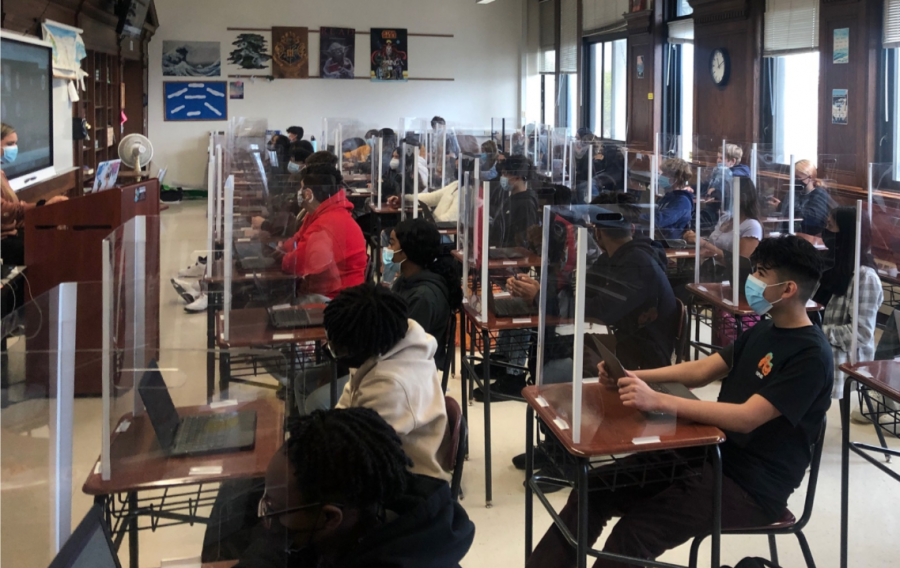 Thanks to new CDC rules and plexiglass shields, student desks have been moved closer together permitting five-day-a-week learning. While the virtual model is still offered, about 75 percent of the student body returned to "normal" classes.

Anthony Degraffe got a glimpse of normalcy at school the week of April 5 when he went to school for five consecutive days – the first time since March 2020.

“Going back will give seniors a somewhat normal ending to a crazy turn that no one expected,” said Degraffe, senior. “It is our last ride. We don’t have another two years of normal high school experience – we have three months left of being kids..”

Thanks to the pandemic, students and teachers were forced to shelter at home last year and the building sat empty until Sept. 2020. Although the hybrid option was introduced in the beginning of this school year, efforts have been made to reintegrate students back into a normal, five day in-person week, starting with the elementary level back in November, according to the district.

In March, the district proposed a staggered schedule to bring back high school students full-time. On April 5, the senior class of approximately 487 students returned to the building for a full week of school, with some choosing to stay virtual. Freshmen returned the following week, and juniors and sophomores began full-time, in-school classes on Apr. 19.

“With only three and a half months left of school, I think we would have been better off coming back in September,” said Catherine McMurray, sophomore. “I feel like most people have gotten acclimated to hybrid and now have a routine, and now suddenly throwing us back in is off-putting.”

Approximately 450-500 students –  about 25 percent of the student body – have remained virtual, according to Pashkin. Some of those students are on temporary quarantine, he said, so they may not actually have selected to be “virtual” but instead are participating virtually until their quarantine period is over.

“I think students who are having a hard time focusing at home will benefit from coming to school fully,” said Peter Southworth, vice president of the Bay Shore Classroom Teachers Association. “We fully support it as long as it is done safely.”

New CDC guidelines have allowed this integration back into school, as  students are now permitted to be at least three-feet apart in classrooms where mask use is universal and in communities where transmission is low, moderate, or substantial. In highly transmissible environments, the six-feet apart rule should still be applied.

“We remain vigilant regarding COVID-19 and are taking all precautions necessary to meet the needs of our students while still maintaining the protocols required to keep our school community safe,” said Joseph Bond, superintendent.

“We will continue to put the health and safety of our students and staff first in every decision we make.”

A recent Maroon Echo poll found that 44 percent of students felt returning full time was questionable, followed by 19 percent who said they felt unsafe. Eighteen percent of respondents said they felt safe. Students of various grades and situations, in-person and virtual, responded to the survey.

“I am not returning because my grandma, who is high risk, lives with me and I do not want to risk her safety.” said Charlsey Bast, junior. “It’s also been disappointing to see that not [everyone] wears their masks fully/properly throughout the duration of class.”

The school has integrated plexiglass shields in almost every location of the building. Cafeterias have reinstalled the 12-seat circle tables, with modifications, to accommodate the increase in students.

“Desks were removed from the cafeteria and replaced with tables to allow for more seating,” said Pashkin. “Since six feet distancing isn’t possible at cafeteria tables, plastic dividers were installed to provide an additional barrier between students seated at the same table. Plastic dividers have been installed in most/all learning spaces where six feet of distancing is not possible.”

To allow double the number of students in classrooms, each desk now has its own 22.8 x 11.7 inch shield, added as another protective element.

“I feel distanced more than ever from my friends and peers, thanks to the shields,” said Amanda Swenson, junior. “Plus, it’s impossible to see anything through them. Everything is obscured and as a result, it makes learning 10 times harder.”

Schools across the island are creating their own reopening policies. Approximately 70 districts in Suffolk have announced return-to-school plans, as Nassau follows close behind with 63 districts that already proposed plans in March, according to News 12. The country seems to be following suit as well, with states such as Iowa, Arkansas, Texas, and Florida requiring districts to offer in-person instruction five days a week, according to CNN.

“I’m really looking forward to going back to school,” said Elizabeth Wagner, junior. “It’s going to be weird seeing everyone, and having more than seven kids in my class, but that doesn’t bother me because I’m excited to finally be in school and see my friends again.”