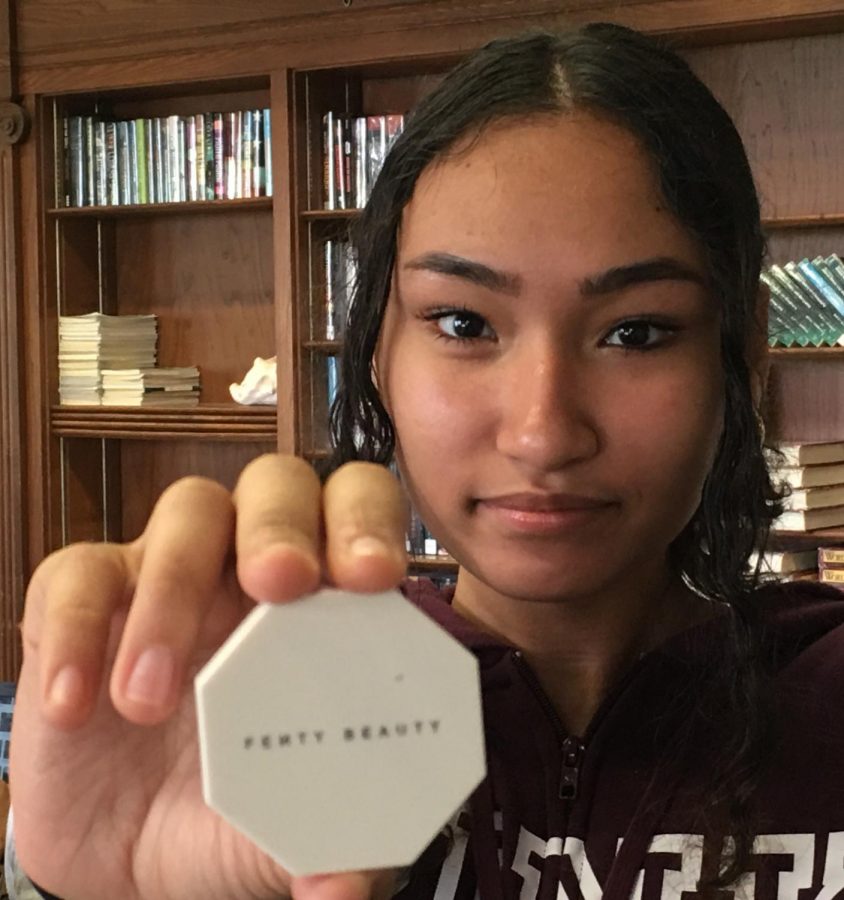 By Camryn Garrett and Hope Scalici

Rihanna has added a new title to her list of talents: beauty industry mogul.

With the debut of Fenty Beauty last year, the singer addressed a lack of makeup available for women of color with highlighters, concealers, 40 shades of foundation, lip gloss, and makeup tools. According to New York Magazine, the darkest shades almost immediately sold out, with seven of the thirteen darkest shades marked as out of stock just four days after the product’s release.

“I think the biggest shift in marketing makeup products has been the use of social media,” said Robin Maloney, fashion marketing teacher. “Traditional commercials are still used, however Facebook, Instagram, and Twitter have become a more effective way to reach a target market.  There are also many apps used to promote beauty products.”

“Most brands don’t think about the demographic as a whole [and provide] less shade options,” said Alexis Aguilera, sophomore. “[Fenty provides] shades for different undertones so there’s a lot of shades for everyone. Their brand also has universal lip shades that look amazing.”

Research firm Mintel reports that black women may “face challenges in finding shades that match their skin tones” and that only 37 percent of black females over the age of 18 say they use foundation, compared with 50 percent of white females.

“It’s actually really difficult to find makeup in my skin tone because some foundations don’t necessarily have the same pigment as my exact color,” said Naomi Bosque, junior. “Sometimes I do have to mix foundations to find my right color and not look too orange or too pink.”

According to Cosmopolitan, brands don’t always succeed in getting the undertones or depth of darker shades right. To create deeper hues, some chemists mix in too much black pigment, which can leave skin looking bruised. For a caramel hue, there may be too much red or yellow, which can leave skin looking orange. Sometimes, chemists add titanium dioxide, a pigment used in many cosmetics to add coverage. Result: an ashy finish. So even when dark shades are available, many of them haven’t been very good.

“It is important for makeup lines to come up with makeup that works for women of color in order to reach all women.  They need to embrace our diverse population and address their beauty needs,” said Maloney. “I have noticed makeup lines such as Lancome and L’Oreal select Lupita Nyong’O and Sofia Vergara as the “faces” of their respective brands.  They are both successful actresses with a diverse fan base who now endorse these products.”

According to Cosmopolitan, Balanda Atis, L’Oréal chemist, created L’Oréal’s Women of Color Lab in 2014, a team devoted to formulating cosmetics for different ethnicities. The lab identified an aquamarine blue pigment that has the ability to create deep, pure color, to create the perfect foundation match in Lancôme’s Teint Idole line for their newest face, actress Lupita Nyong’o.

“The best brand for my skin is Maybelline. It’s difficult to find my foundation shade, which is a more yellow toned color, but not too difficult,” said Isra Khan, sophomore. “I’ve tried the Fenty beauty highlighter, which is really, really gold in color.”

According to New York Magazine, M.A.C., which is often praised for its variety of foundation options, offers 48 shades in its Studio Fix powder foundation, and L’Oréal’s True Match with 33 shades. However, the vast majority of makeup brands offer far less. However, according to the New York Times, even if a brand like Lancôme has 30 skin shades, but only five of them will be for women of color.

“[Fenty has] 40 foundation shades and 50 concealers – I don’t know any other brand with that wide of a shade range, there are even shades for albino people,” said Izzy Supris, senior. “I think other brands have started to create better ranges, but Fenty Beauty fueled that for sure.”

According to a commentary from the American Journal of Obstetrics and Gynecology, researchers from George Washington University and Occidental College argue that women of color are exposed to higher levels of toxins than white women because, on average, women of color use more cosmetic products in an effort to comply with European beauty standards.