Teens may listen to celebs’ political views, but aren’t swayed by them 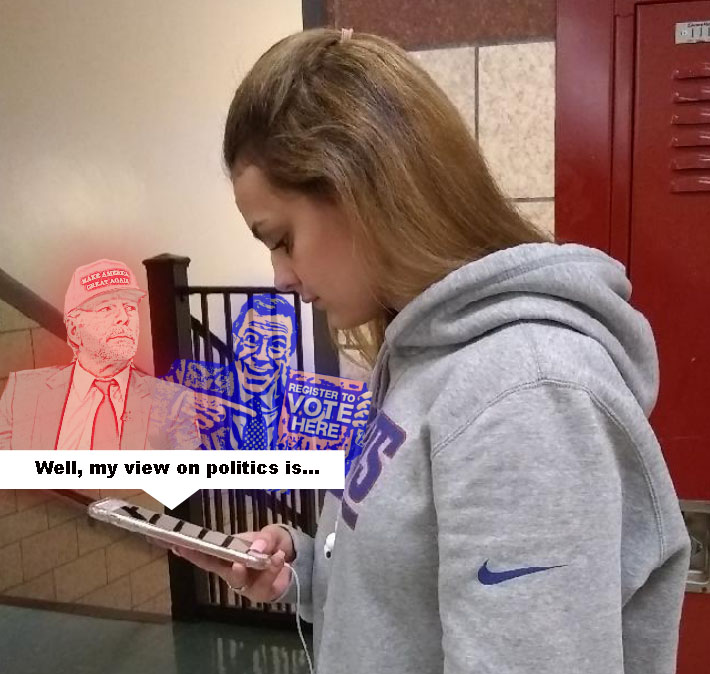 Research finds that young adults won’t particularly listen to celebrities when it comes to advice on politics, despite teens paying more attention to them than actual politicians.

By Renae Godfrey and Rachel Bracero

Although Kylie Jenner is an idol of Ela Valadares Hyde, there are limits to how much sway she has over her opinions.

“Kylie Jenner is famous and knows mostly everything, but her opinion doesn’t matter when it comes to politics,” said Valladares Hyde, sophomore.” She’s more relatable in things like makeup, hair, and girly things.”

When it comes to politics, teens are more likely to listen to celebrities – with their built-in fan-base and public platform from which to speak – than actual politicians, according to a 2014 study published in the journal Celebrity Studies.

“Kevin Hart is popular and when you see his name you understand who he is,” said Jordan Sanders, junior. “If he told me to vote for someone, I probably would, but I wouldn’t hold his opinions higher than my own.”

Young adults won’t particularly listen to celebrities when it comes to advice on politics, according to a 2016 study published by the Atlantic Journal of Communications, but stars can instill a greater interest in an issue without changing particular attitudes.

“[Celebrities can] use their platform positively and not tell people how to vote but to vote and pay attention to what’s going on,” said Dr. Aaron Johnson, social studies teacher. When voting, young adults need to “learn, and read…go with your gut.”

A recent Hollywood Reporter/Morning Consult poll found nearly 60 percent of American teens do not have any interest in political or social opinions of celebrities because they don’t think their views matter. A little over 20 percent have detached themselves from certain celebrities because of their political views.

“RuPaul holds a place in my heart because they have helped me in my life,”  said Autumn Greenridge, senior. “I wouldn’t [stop being a fan] because of their political views, but I wouldn’t be as much of a fan as I was before.”

Pop star Taylor Swift broke her political silence on Oct. 10 and used her Instagram to encourage her nearly 113 million followers to vote. Swift, who lives in Nashville, came out against Rep. Marsha Blackburn (R) who is running for Senate because she “voted against equal pay for women…the Reauthorization of the Violence Against Women Act [and] believes businesses have a right to refuse service to gay couples.” Within 24 hours of her post, voter registrations were up by 65,000, according to BuzzFeed and more than 240,000 people had registered 48 hours later. To understand the impact of Swift’s post, a little over 190,000 voters registered in the entire month of September.

“Taylor Swift and the voter registration spike is phenomenal, but I don’t think, for the most part, celebrities are as influential as some people think that they are,” said Nell Kalter, film teacher and pop culture aficionado. “For the amount that [young voters] are exposed to online, 24-hour news and all of that, they should be far more willing to get out there and vote.”

Oprah Winfrey is campaigning for Stacey Abrams, who is running for governor of Georgia on the Democratic ticket. An August 2008 study by the University of Maryland found that Oprah Winfrey’s endorsement of President Obama in 2008 was responsible for an estimated one million additional votes.

“We have a celebrity worship culture,” said Dr. Johnson. “If you look around long enough, you will see a lot of our kids are pretty much super connected to celebrities and they know more about celebrities and the Kardashians than they do about their state representatives.”

But according to Michael Cobb, associate professor of political science at North Carolina State, in a 2016 Vanity Fair article, celebrity support of a candidate doesn’t mean they’re doing anything about voter choice.

“I’m so influenced by [NY Islanders Captain] Anders Lee because they do a lot of good in the world and they don’t try to hurt people, they try to bring people up,” said Heather St. John, senior. ”I might consider [voting for whom he supports] but I wouldn’t automatically say, ‘Oh I want to vote for that person’ because he said to.”